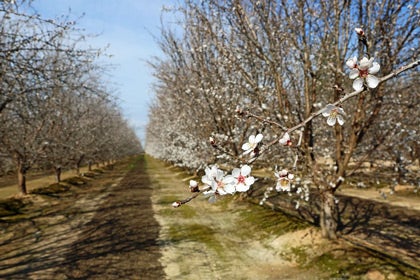 Before we jump into the debate between dry vs. liquid sources of potassium, let us first cover some basic agronomy as it pertains to potassium nutrition in almonds. Potassium plays various essential roles in all plant species. For almonds and other crops that produce large amounts of carbohydrates, potassium plays key roles in photosynthesis, sugar translocation and starch formation. And nuts are basically starch, with lesser amount of oils and protein.

Good potassium nutrition does not cost money; it makes money

With global markets tight and fertilizer costs at record highs many orchardists are forced to do more with less. The traditional approach to building soil K levels by single application of high rates of dry granular potassium won’t be an option for many almond growers. Reduced rate applications including spoon feeding fertigation and foliar applications will grow in importance in today’s economic environment.

Is fertigation with potassium more efficient than dry granular application? How do the two compare pound per pound of K?

These are valid questions to be asking particularly for growers who omitted their traditional fall dry applications and for growers who did apply dry potassium in the fall but received little rainfall, which would be required to solubilize granular potassium and subsequently move K into the root zone. Unfortunately, there are no one-size-fits-all answers to these difficult questions due to differences in soil types, K-fixing properties, method of irrigation, variations and timing of winter rainfall, frequency of irrigations and other factors.

As early as the late 1980s work on drip irrigated prunes by Uriu, Carlson, et al published in the Journal of American Horticultural Science clearly demonstrated the effect of placement and application method on leaf K response and potassium movement in the soil profile. In one trial potassium sulfate applied through the drip from June 4 – September 10 was compared to twice the rate applied as a subsurface band and an untreated control. Leaf K levels were significantly higher in the drip-applied K treatment than the 2x rate soil applied treatment.

The four year average, below, showed a significant yield gain from the drip applied liquid potassium compared to 2x the rate of K2O applied as dry granular potassium. 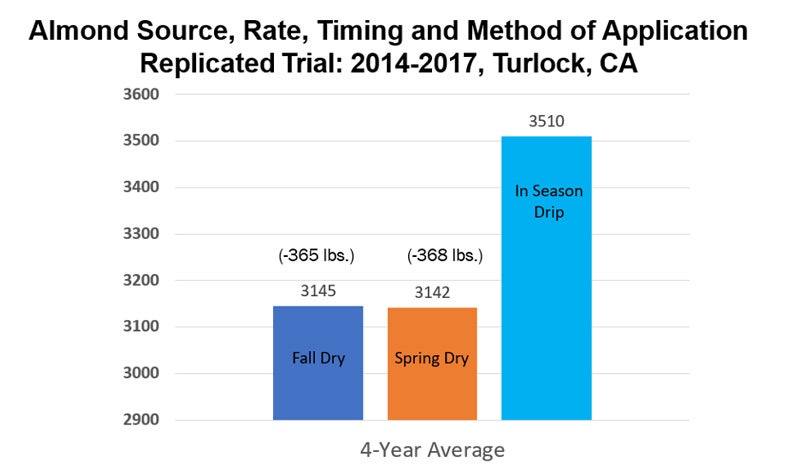 It is vitally important to remember that even though spoon feeding via fertigation can be a more efficient method of delivering plant available potassium, eventually the soil may become depleted necessitating replacement rates using less costly dry granular sources. Consider the above trial. Annual K2O removal rates for the drip treatment were around 350 lbs. per acre. But only 128 lbs. were applied annually. Over the four-year trial this created a deficit of nearly 900 lbs. K2O per acre! Bottom line, when employing reduced rate technology, monitor soil potassium levels and if levels begin to decline, then it is time to pay the piper and invest in dry granular potassium.

See your Wilbur-Ellis field agronomist for the potassium program and source that is right for you.