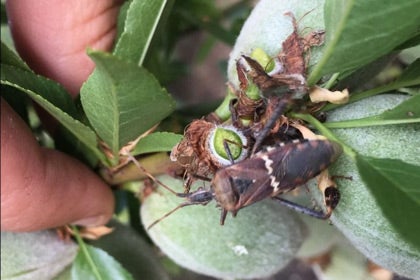 Two true bugs that are a problem in almond orchards in the San Joaquin Valley are the Green Stink Bug and the Leaf Footed Plant Bug. Both insects can cause damage to the crop that can result in economical loss to the grower. The Green Stink bug is the most common stink bug found in almonds.

It is a bug that has a shield-looking body, has 6 legs, and a yellow line outlining the shape of the bug. Nymphs are black but as it develops and grows the green color starts to be dominant. Young adults turn green and have a shiny coat, but at that stage, the stink bug lack wings. Adults are more of solid green and the wings are developed. 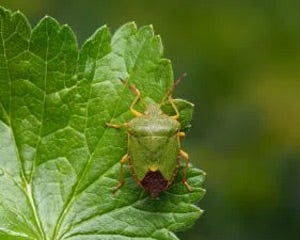 The eggs are laid in a line or strand, and they are usually found on almonds hulls. Once the eggs have hatched it is important to identify the nymphs. The nymphs have a red body with black legs and 2 antennas are present. the leaf footed bugs resemble the looks of a katydid nymph, but the katydid is black and has stripes on the antenna. The leaf footed bug is red, and the antennas are a solid color. As adults both the leaf footed bug and the stink bug cause similar damage to the almonds through the long mouthparts piercing through the hull and damaging the embryo/almond.

The green stink bug (Acrostenum hilare) damages the almond by injecting an enzyme that liquefies the source of food that it will be feeding on, making it easier to travel up the needle-shaped feeding mouthpiece it has. The fruit then releases gummosis that can be seen outside the hull. The Stink bug usually pierces the hull multiple times and the gummosis is shorter but more frequent on almonds. Multiple feeding injuries can still cause the almond to be aborted even if the damage did not reach the kernel. Leaf footed bugs on the other hand will pierce the almond and leave a gummosis injury longer than that of a stink bug. Both damages can reduce the quality of the fruit, in worse cases, the almond will be aborted because of the damage. The time window for the damage for stink bugs is shorter than that of a leaf footed plant bug. The reason behind that is because the mouth part of a leaf footed plant bug is longer than the stink bug. Once the almond and the hull reach a certain size, the feeding mouthpiece of the green stink bug is not long enough to penetrate through the hull and damaging the embryo.

This Photo by Unknown Author is licensed under CC BY 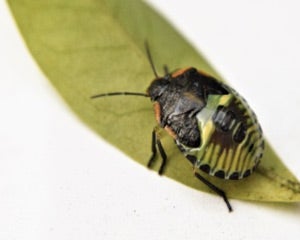 Leaf footed plant bug scouting should start in March when the temperatures begin to rise. The scouting for damaged fruit should continue to post-harvest and into winter. Finding evidence of leaf footed plant bugs in the fall can increase the possibility of an insecticide mixed with the winter oil spray application. Both bugs have a stealth movement meaning that when they are approached by a person, the bugs tend to hide behind leaves, making it difficult to spot. The leaf footed bug likes to stay high on the tree and can be difficult to be seen. Sometimes the only indicator for us that leaf footed bug is present is by the piercing damage on fruit, or by aborded nuts in the ground. waiting to see nuts on the ground might not be as effective because it would mean that the leaf footed bug has been feeding there for approximately 1 week.

Stink bugs can be difficult because of the color they have, allowing the stink bug to camouflage with the leaves. Scouting for stink bugs can begin in the winter because the green stink bug overwinters in almond fields. Continue scouting until late summer that is usually when the shell is hard enough to prevent the penetration to the almond. The most susceptible varieties for stink bugs are the soft-shell varieties including Monterey, Fritz, Sonora, Aldrich.

Currently, there is no threshold set for leaf footed or stink bugs. If damage levels are high and potential economic loss is possible, there are insecticides that can be used to reduce the population. The decision for treatment and timing is based on the PCA and the grower. For treatment options and solutions please consult your PCA.