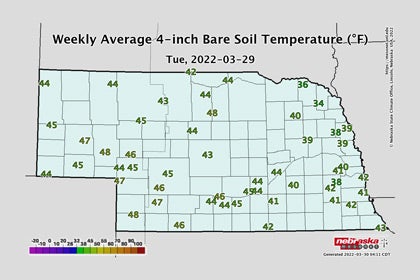 Consistent morning soil temperatures are remaining in the high 30’s and low 40’s across the state. Producers which have ventured into the field for tillage and pre-planting fertility applications have commented on how mellow or loose the soil is. This is again another product of dry soil. If the soil profile is below 50% of its water holding capacity at root depth–wilting point—the soil is bound to be loose/mellow due to the lack of moisture. Drier planting conditions can also promote the idea that “I have the plant it to moisture.” It is true that it is better to error with seeding depth on the deeper side than to be too shallow–within reason. Shallower planting can increase the occurrence of rootless corn syndrome–this occurs more often when conditions are dry at planting. Corn plants that wilt and flop in the wind in mid-to-late May characterize rootless corn syndrome. The radicle and seminal roots, or seed roots, that support the plant until about the two- to three-leaf stage, cannot root properly due to the lack of initial seed depth. Once the plant reaches the 4 leaf stage and beyond the nodal roots take over. Nodal roots develop at the crown between the seed and the soil surface. Shallow planting increases the potential for nodal roots to develop in dry soil. If nodal roots do not reach moisture, the tips may desiccate and die, causing rootless corn syndrome. Corn planted too deep (deeper than 2.5″) can encounter uneven emergence, stand loss, increased chances of insect and herbicide injury, etc. 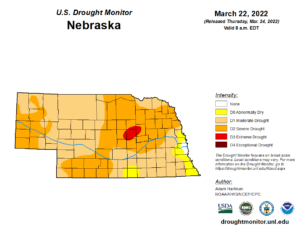 It’s Still Dry. I don’t mean to bring up bad news, but this should be a consideration when deciding what or if  pre-planting tillage should occur. Recent showers have been spotty at best and the moisture received since last fall has done little to improve the dry subsoil moisture situation. The latest soil moisture calibrations conducted through the Drought Monitoring Center have found that in Eastern Nebraska we are generally 5-8 inches deficient (based on soil types)  in the top 4 feet of soil. (Digging in some soybean stubble yesterday, the top 4” under residue was quite moist but, under that to an 18” depth there was little or no moisture).  At this depth and moisture level—that is sufficient to get the crop germinated and established. An adjacent soybean field, which was disked last fall, was nearly bone dry at the same 4″ depth. This is important since corn can root and absorb moisture from a 4 foot depth and an average silt loam which can hold about 2 inches of water per foot of soil—-a full soil profile would have about 16 inches of available soil water. An average corn crop here in Eastern Nebraska can use through transpiration between 25-28” of water per season.  Long story short, at the present time we need to conserve as much soil moisture as possible. No-till is not perfect and requires some patience for you to see the full benefits. The main issue as we approach planting to soil moisture conservation. Seed/soil contact is important and there are legitimate reasons in which tillage occurs with certain soil types but, it has also been documented that tilling (disking) can result in a loss of up to 1 inch of soil moisture, while field cultivation can result in up to a ½” loss.