Fungus Amongst Us – Common Rust vs. Southern Rust 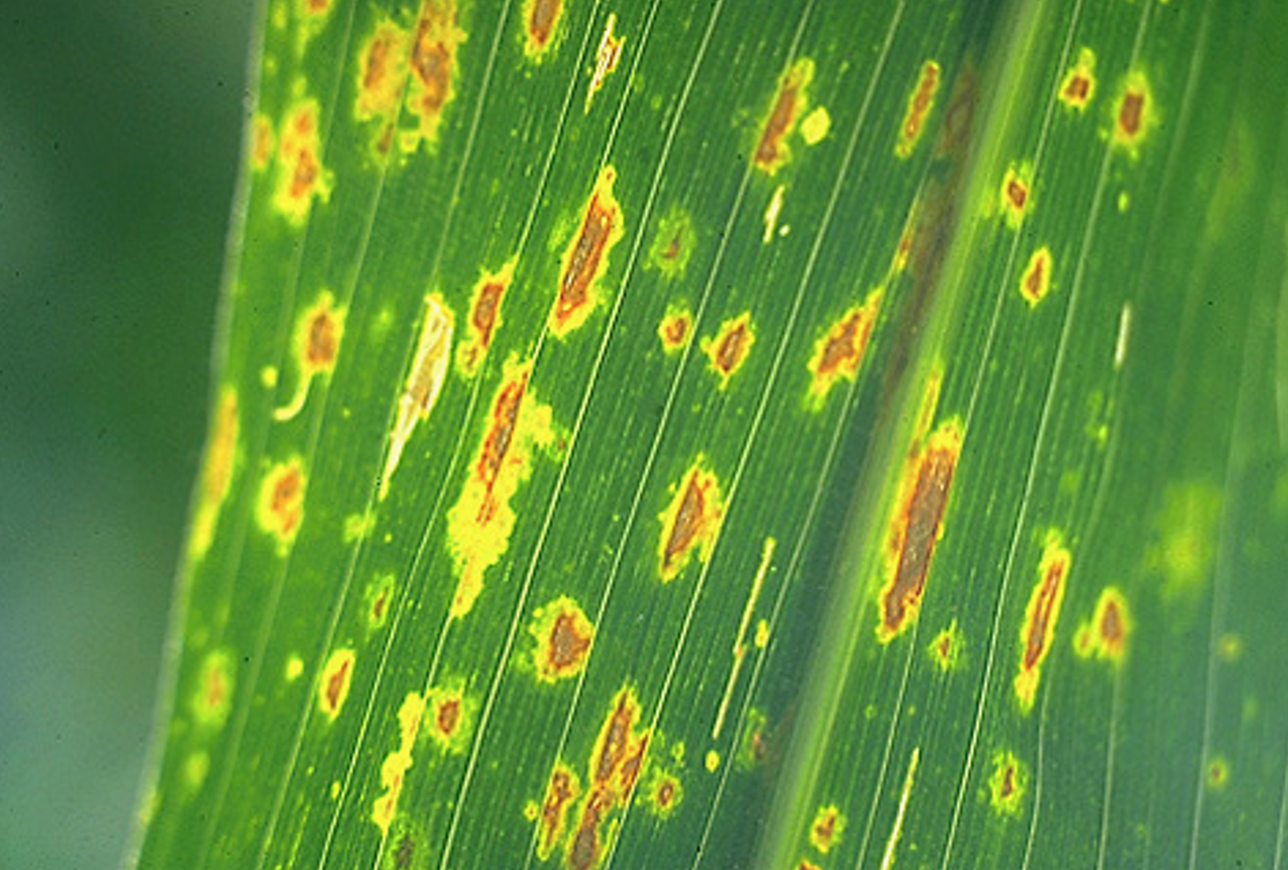 Fungus Amongst Us – Common Rust vs. Southern Rust

August 04, 2022
While occurring every year, this year common corn rust appears to be more prevalent than usual.  Additionally, Southern rust has been detected in Kansas and counties along the Nebraska/Kansas state lines.  It is likely that the unusual weather patterns this Spring and early Summer brought the spores of the fungus from the southern US into the Cornbelt early in the season.   Common and Southern Rust identification is key here as Southern Rust has more yield robbing potential than Common Rust.  I have witnessed Southern Rust in Nebraska, BUT it really has not done much damage to date as I believe that the temperature regimen needed to culture it’s growth does not happen here often…

Background
The fungus causing Common rust, called Puccinia sorghi, is an obligate parasitic. This means that fungus cannot be artificially cultured in the laboratory and survives only on living corn plants.  It cannot overwinter in any debris left in cornfields.  Its occurrence from year to year in the Corn belt is entirely dependent on the fungi’s ability to be maintained on over seasoning corn in the extreme southern US, Caribbean, or Mexico.

Symptoms of common rust during the growing season are the presence powdery pustules that are reddish to cinnamon-brown in color and circular to elongate in shape.  The pustules can occur on any above ground plant part but are usually seen most commonly on the leaves.  Pustules will form on both the upper and lower surfaces of the leaf in nearly equal numbers.  These pustules contain spores that are capable of re-infecting corn.  As the season progresses, a different spore stage is produced within the pustules so the symptoms of the disease will subtly change.  Usually, more necrosis develops around existing pustules.  Then a darker brown to black spore replaces the red-cinnamon spores.  This spore stage will not re-infect corn but in certain areas of the world will infect wood sorrel which is the alternate host for this organism.

SONATA® is a biofungicide with live bacteria spores that induce plants’ natural defenses to resist disease development
as well as anti-fungal compounds that have contact fungicidal activity.
SONATA’s multi-site mode of action is ideal for fungicide resistance management and disease control. 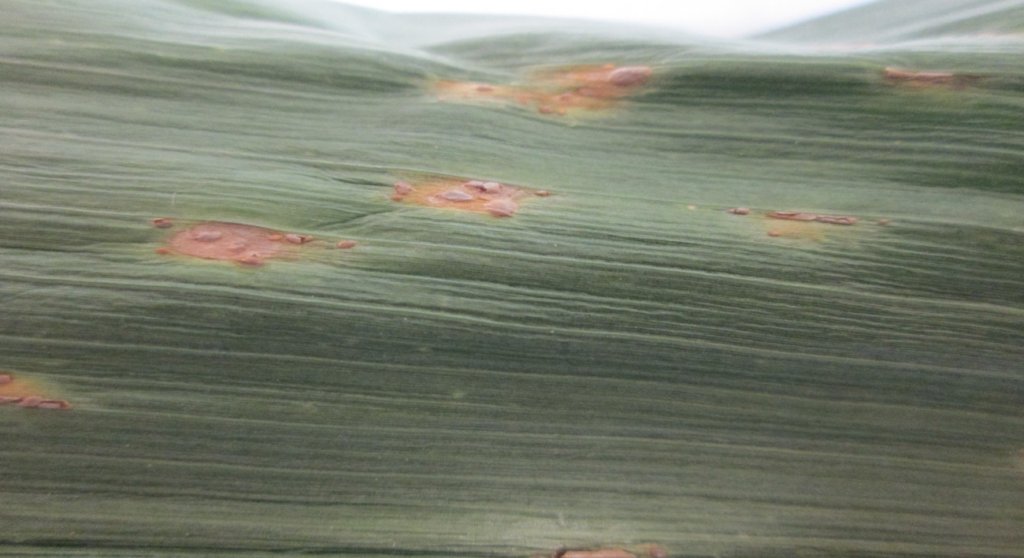 The Common rust lesions on the leaves may resemble other diseases such as the foliar phase of Anthracnose or southern corn leaf blight. Common rust is easily confused with a related disease, Southern corn rust. The dense production of pustules on the upper leaf surface and sparse production on the lower leaf surface can be used to differentiate Southern rust. The pustules of Southern are lighter in color (orange to cinnamon brown) and circular to oval in shape. Microscopic examinations may be required for a definitive diagnosis. 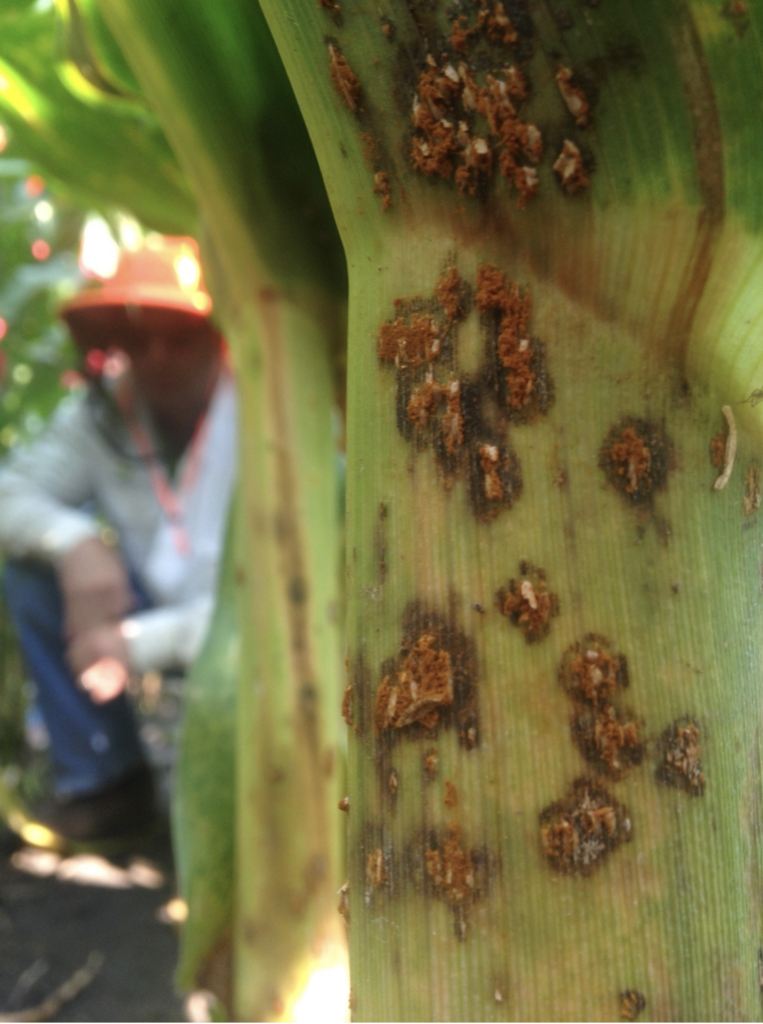 Southern rust is caused by the fungus Puccinia polysora

Although generally considered a tropical disease, southern rust can occur in important corn production areas of the United States and Canada. Symptoms are similar to common rust, but pustules are smaller and occur almost exclusively on the upper leaf surface. Pustules are usually circular or oval, very numerous, and densely scattered over the leaf surface. Spores are orange when they erupt from the pustule. As pustules age, they become chocolate brown to black, often forming dark circles around the original pustule.
The disease is favored by high humidity and temperatures around 80°F. 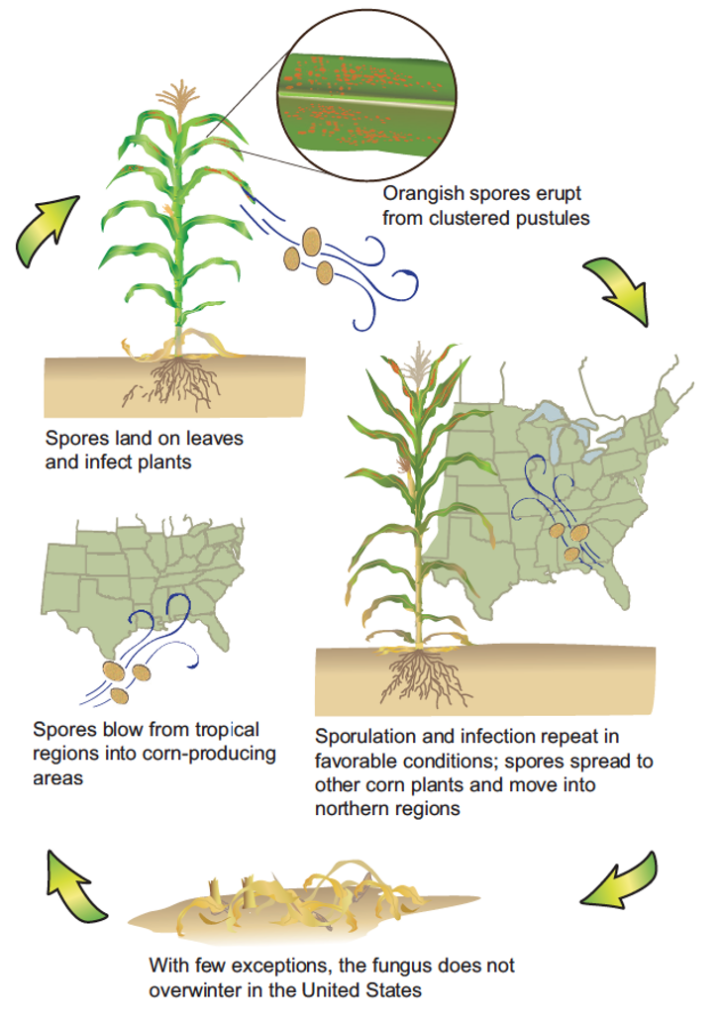 It is mid July and we are primed for Gray Leaf Spot to develop—-Although, little to no evidence as of this today (Tuesday July 19th), development should not really be surprising given the humid weather of the current growing season.  GLS thrives in humid/wet conditions and high temperatures. While it currently is not excessively wet, high humidity can provide the conditions necessary for infection to occur. GLS is more dependent on environmental conditions than on inoculum levels, but reduced tillage and no-till practices also may be a factor, since the pathogen survives readily in corn residue.  Since the fungus is a poor competitor with soil microbes, the pathogen survives from one season to the next only if surface debris are present.  Spores produced by this fungus are splashed by rain or blown by wind onto corn leaves where the infection occurs.  Early spring rains aided in crop growth but also helped in the disease development.  Prolonged periods now of high humidity, night temperatures above 70 degrees, heavy dews and fogs, and/or frequent rains have favored the development of the disease in some areas.  The characteristic symptoms of the disease appear on mature leaves (older, lower leaves of the plant) in the form of ½ to 1 ½ inch long narrow lesions with parallel (interveinal) sides and squared-off ends.  The lesions are tan until spores (sporulation) under humid conditions produce a gray cast to the leaf—hence its name.  Treatment is generally unjustified until the infection moves up the plant to the ear leaf and prior to the dent stage of crop development. 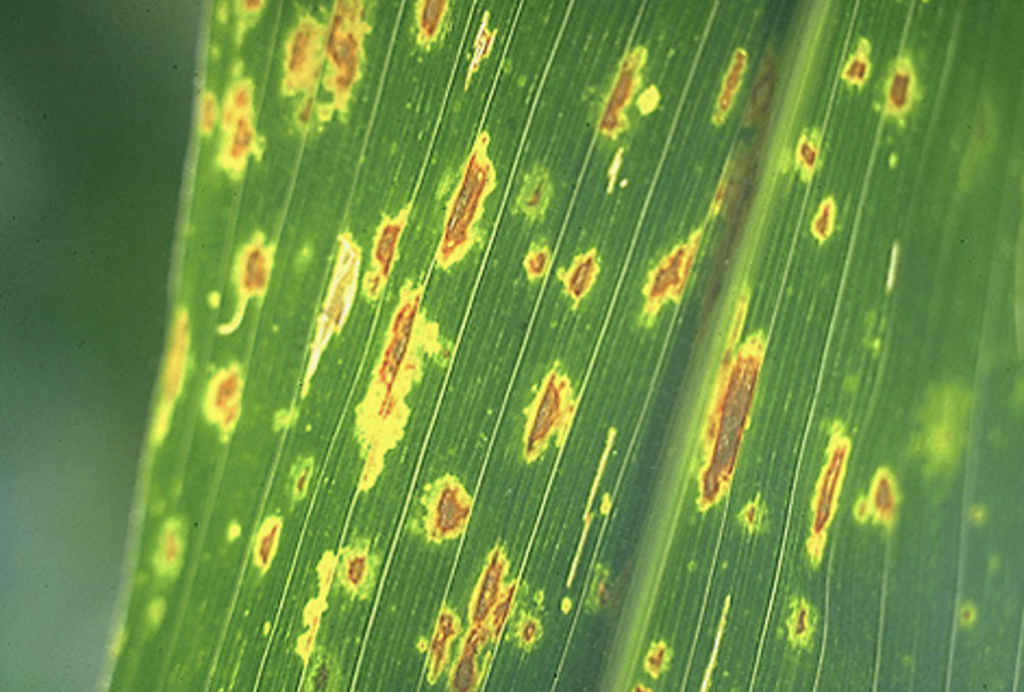 GLS lesions initially are pale brown or tan. They first appear on the lower leaves of corn plants as spores are wind-blown or rain-splashed from residue. Lesions may turn gray and move up the plant as the disease progresses. The lesions are ¼ to 2 inches long, narrow and rectangular. In susceptible hybrids, lesions may coalesce, causing extensive leaf tissue damage. If the right environmental
conditions exist, GLS could kill entire fields prior to maturity.