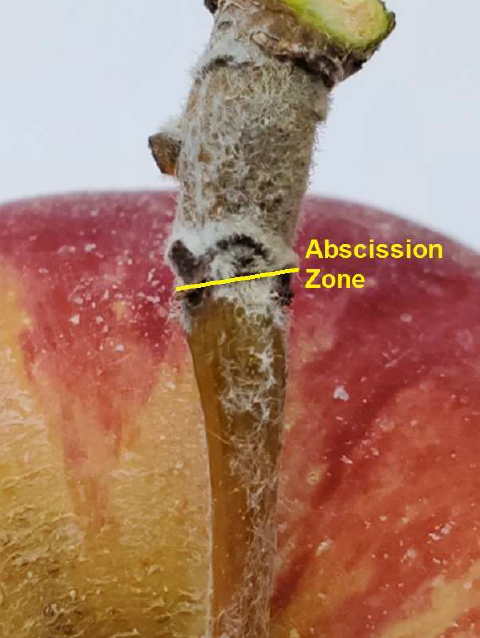 August 31, 2022
Optimizing performance of apple stop-drop products can be improved with a basic understanding of the physiology of pre-harvest drop and some of the factors that can influence it. Apples are a climacteric fruit, meaning that the maturation and ripening processes are ethylene-mediated. As apples mature, the biosynthesis of ethylene upregulates the downstream expression of genes that are responsible for fruit softening, as well as the expression of genes that cause fruit abscission. There are at least 5 different genes involved in this process, but two of them are of particular importance for understanding how stop drop products function. The gene MdPG1 is one of the genes responsible for fruit softening, while MdPG2 is responsible for fruit loosening. These are called polygalacturonase genes (the “PG” in their acronym) because they stimulate the production of polygalacturonase, an enzyme that breaks down pectin. Pectin is the “glue” that binds cells together, both in the cortex and in the abscission zone, which is an approximately ½ mm wide zone where the peduncle is attached to the spur. As ethylene production increases, the upregulation of MdPG1 produces the PG enzyme that starts to break down pectin in the fruit cortex, resulting in fruit softening; and MdPG2 produces the PG enzyme that breaks down pectin in the abscission zone, resulting in the collapse of structural cell walls. This leaves the fruit attached to the spur only by the vascular strands which have virtually no strength at all and are easily broken by just the weight of the fruit. 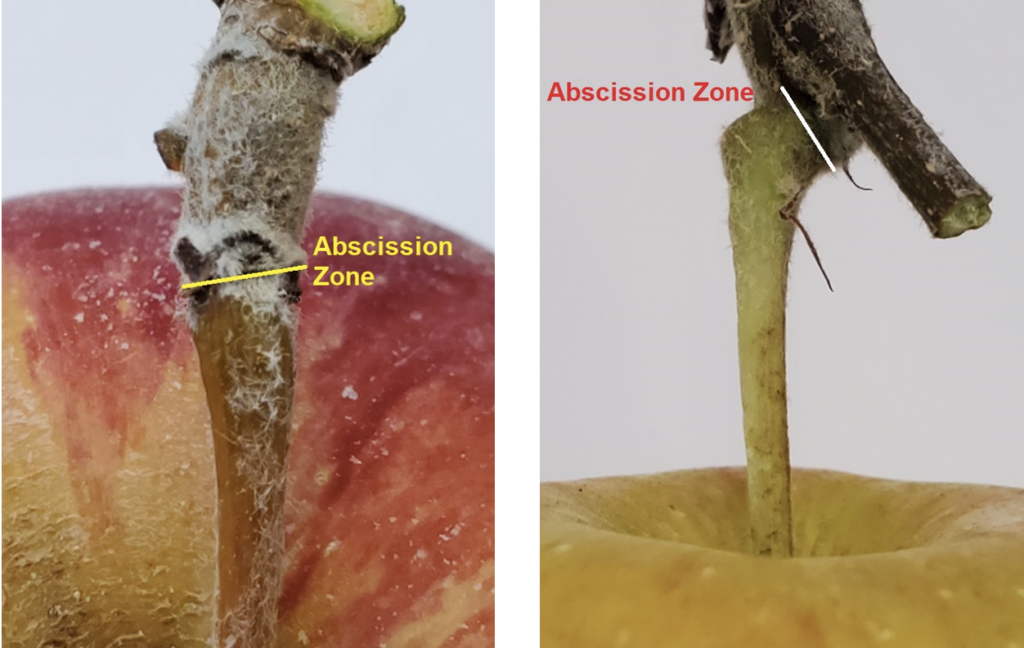 The Abscission Zone (AZ) is a ½ mm wide zone at the junction of the peduncle and spur. 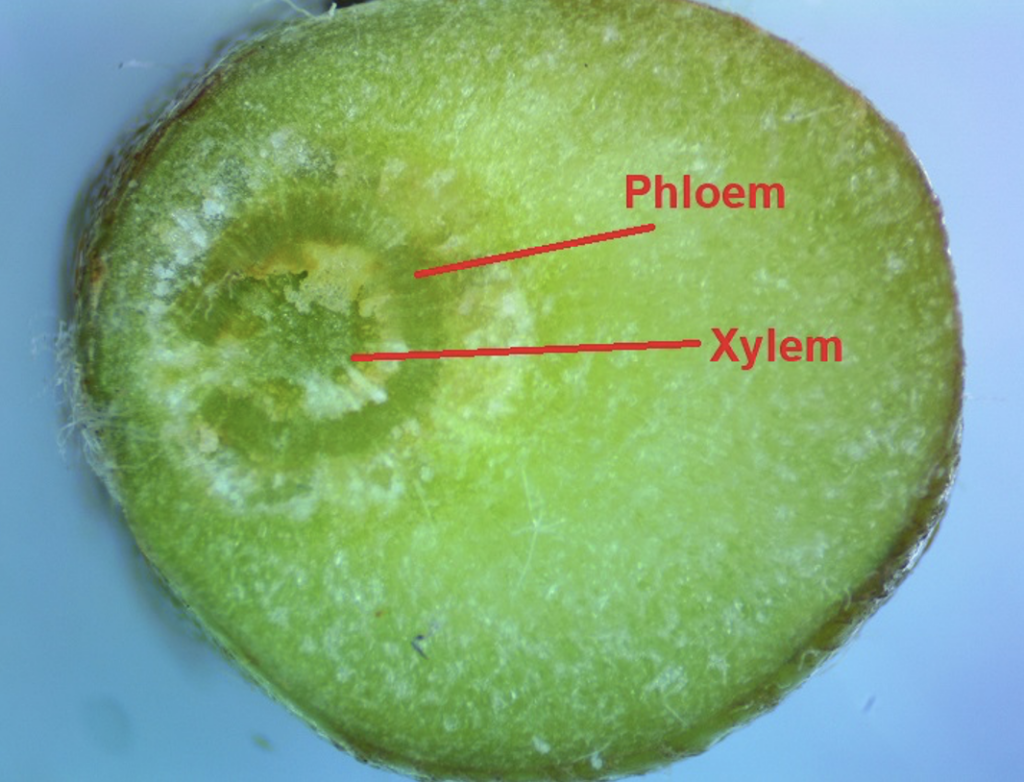 The vascular bundles in the abscission zone where the peduncle is attached to the spur.

Some apple cultivars are more prone to pre-harvest drop than others. In general, varieties that are high ethylene producers will have more severe pre-harvest drop than low ethylene producers. For example, Honeycrisp and Red Delicious will experience heavier drop than Granny Smith and Fuji. Nutrition also plays a role. Incidence and severity of pre-harvest drop both increase if Magnesium is low, coupled with high levels of Potassium and Boron. Boron alone is an interesting nutrient as it relates to fruit drop. If boron levels are too low, drop increases. Conversely, if boron levels are too high that also increases drop along with accelerated fruit softening and reduced storage life. Hot weather and drought or even deficit irrigation taken too far will increase drop by creating stress on the tree, which in turn stimulates ethylene production. Stop drop products are always less effective in hot weather and can be completely ineffective if the tree is under enough stress. Severe mite infestations have a similar effect. Significant leaf bronzing reduces photosynthesis, which in turn reduces carbohydrate availability to the fruit. This increases the likelihood of pre-harvest drop. Similarly, anything that reduces leaf: fruit ratio to less than 20: 1 will do the same thing (excessive crop load, defoliation, severe summer pruning, etc.).

NAA (PoMaxa®, K-Salt® Fruit Fix® 800, Refine®) and AVG (ReTain®) are the two primary products available for pre-harvest drop control. These work in different ways, and it’s important to understand both their differences and their similarities. NAA is a synthetic auxin that’s been around for 60 years. It reduces pre-harvest drop by directly inhibiting expression of MdPG2 in the abscission zone. Applications should be made about 1 – 2 weeks before harvest, or when the first sound fruit begin to drop. It takes 2 – 4 days after the application before NAA takes effect, and the effect lasts for 1 – 2 weeks, depending on things like weather and crop load. Up to 2 applications can be made, with a 2-day pre-harvest interval. One of the potential downsides to using NAA as a stop drop is that auxins stimulate ethylene production, so NAA can accelerate ripening. It also directly upregulates the expression of MdPG1, which advances fruit softening. This effect is more pronounced in hot weather because of the added ethylene biosynthesis, but occurs at some level regardless due its direct effect on the fruit softening gene. NAA is absorbed by the spur leaves and doesn’t translocate very far within the tree, so good coverage of spur leaves is critical to performance. The use of a good nonionic or organosilicone surfactant will help.

AVG (ReTain) has two modes of action when it comes to reducing pre-harvest drop. The first is it blocks biosynthesis of ethylene in the fruit. This is the predominant reason for its use – to delay maturity. Because it blocks ethylene production, that maturity delay also concomitantly provides stop drop activity by delaying the natural degradation of pectin in the abscission zone. The second mode of action for ReTain as a stop drop is that, like NAA, it directly inhibits the expression of the MdPG2 gene in the abscission zone. Unlike NAA, however, ReTain also directly inhibits the expression of the fruit softening gene MdPG1. ReTain should be applied anywhere from 2 – 4 weeks before harvest, depending on the desired effect, variety, and length of maturity delay wanted. Length of drop control – and length of maturity delay – depend on the variety, rate used, and timing. ReTain benefits from the addition of Syl-Coat® at 0.05% – 0.1% v/v. The Syl-Coat rate depends on temperatures and application volumes. If too hot, using 440 Superior Spray Oil at ½% v/v also works. In studies, other surfactants like Regulaid® have not been beneficial to ReTain performance. I’m looking at Embrece-EA™ this year to see how it performs.

The late Roncai Yuan from Virginia Tech discovered 15 years ago that the combination of ReTain + NAA gives better drop control than either product alone. Both directly inhibit expression of MdPG2 in the abscission zone, and when combined in a tank mix their effects are additive. Further, he also discovered that ReTain’s influence on inhibiting expression of the fruit softening gene MdPG1 is stronger than NAA’s upregulating effect, so ReTain over-rides NAA’s effect on fruit softening. What this means is that a combination of ReTain + NAA provides superior drop control to either product alone, plus it does so without advancing maturity or fruit softening like can happen with NAA. If drop control is the only consideration, then the tank-mix of the two products should be applied 2 weeks before harvest.

Sequential applications or a single 2-pouch rate application of ReTain will provide better and longer drop control than even the ReTain + NAA tank-mixes, but also significantly delays maturity (and may be prohibitively expensive).

Trial work I did on Reds several years ago showed a 28-day delay in both drop and maturity from the 2-pouch per acre rate. At about that same time, Phil Schwallier in Michigan got a 40-day delay in both maturity and drop on Honeycrisp from sequential applications.